Heaven and hell in “Snake and pomegranate” a solo Show by Shokoufeh Karimi, curated by Maryam Roshanfekr

“Snake and Pomegranate” a solo show by Shokoufeh Karimi curated by Maryam Roshanfekr has been opened to public since April 22nd,2022 at Sheydaei Gallery and runs till May 13th, 2022.

Shokoufeh Karimi, born in 1981 is a holder of B.A. from Azad University and is the founder of “Letka” art institution. So far, she has held 8 group exhibitions in Tehran, Turkey and United Stated and 3 solo shows.

In the statement of the show, stated by Maryam Roshanfekr, curator and art critic we read: “In Mesopotamians myths, there exists a goddess named ‘Lilith’ who refers to the first woman lived before Eve, a woman who disobeyed and left Adam, as she assumed herself the same as him. That is why her reputation has always been accompanied by pain and curse while she never gave birth to any child.

This story narrates what humankind has done to all natural beings who disobey them. Adam established enmity against the nature and consumed it as he assumed himself prior to the nature. Adam created a snake out of woman, then he turned her voice for the peace with the inner nature to the sting out of which the world get divided into the paradise and hell, unaware that either the paradise or the hell, human and the nature are intertwined regarding fate, just like the destiny of man and woman.”

Wearing mask and following hygienic protocols are mandatory while visiting the exhibition. 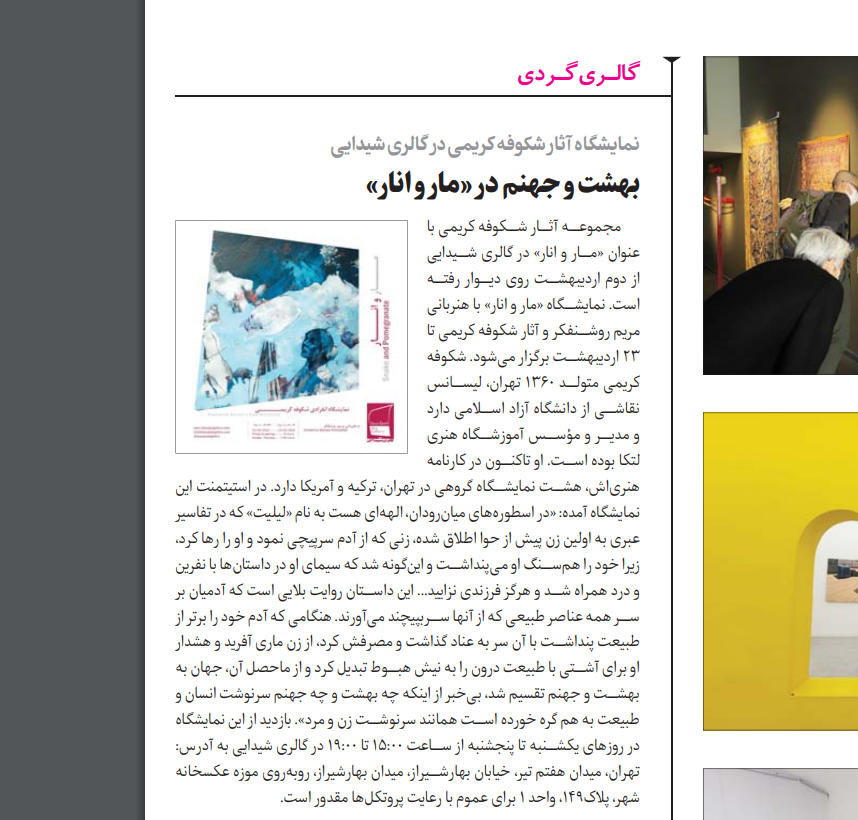