Dwelling the world of dreadful fantasies in Shokoufeh Karimi’s Artworks

Shokoufeh Karimi’s artworks, mutual crop of the artist and her world around

Martin Heidegger who is undoubtedly one of the most important philosophers of the 20th century, has revolutionized contemporary ontology by presenting new theories about being, inness and the world. In fact he denies the fact that human could face themselves against the world while being thoroughly separated themselves from being.

He believes it is impossible for human and the world to exist separately. They are involved into each other. Therefore, an art piece is definitely the crop of involvement of the artist and their world around, since the artist’s raw material to create has always been their experience each of which arises out of the interaction between an alive being and one aspect among all the other universal aspects in which it lives.

In Shokoufeh Karimi’s solo show curated by Maryam Roshanfekr at Sheydaei Gallery, in the first glance, we face a huge mass of distinctive narrations, one located in actual world and the other in the world of dreams and nightmares. Also, Shokoufeh’s unusual technic emphasizes the effectiveness of these narrations.

In all her artworks, the act of creation and devastation is witnessed, parts of an artwork have been covered by color and depicts a disrupted world that is suffered by numerous yet contradictory experiences. The world of the artist’s is a stage for the sweetest and the most dreadful human experiences lead to creation of a fearful fantasy.

While creating art, the artist manages to take destructive and prompt actions, hides the already-been-painted parts under layers of colors and pictures a space again which seems to point at the artist’s inner states.

To Shokoufeh Karimi, painting is a reaction to the human’s unanswered world, while simultaneously the show of a symbolic victory of art over the fear of being and seeking remedy for the suffer and emptiness of life.

Deep inside the world of her Shokoufeh’s paintings, human openly embraces all injured occurrences of being, ornamented and sometimes excessively decorated, ceases the fight to change the destiny and tends to interpret it.

In the exhibited art pieces, the audience is always in doubt of what they face, regarding forms and contents. In fact, we are witness to creation and destruction while viewing them. What doubles this sense of doubt is placing the visual elements associating dream and nightmare by each other’s side at the same time. On the other hand, Shokoufeh Karimi’s technic has also turned into a whole content, she uses her exclusive technic in a way that constantly similarizes birth and death, construction and devastation, hope and despair, remembrance and forgetting.

Shokoufeh Karimi’s works seem like metaphorical reaction that arises from human’s relation with the past and what they’ve experienced and depiction of images that provokes the sense of memory as strongly as possible. The memories that are tried to be forgotten desperately. In her paintings human is not defeated by the situation, though they are captured by it. Human is standing strong against the world with all its ups and downs and turns into the hero of their life story. This hero is often reflected in front of the artist or her daughter.

The artist-known as a calm and quiet woman- owns a deep nature and high sensitivity. She attempts to depict painful facts about life with the help of her imaginary heroes who have shown the world in a charming and fantastic way.

It seems that we are witnessing how human’s return to their environment has been celebrated and the defeated nature, announced its reunion with its lost child who is now acting quite freely. 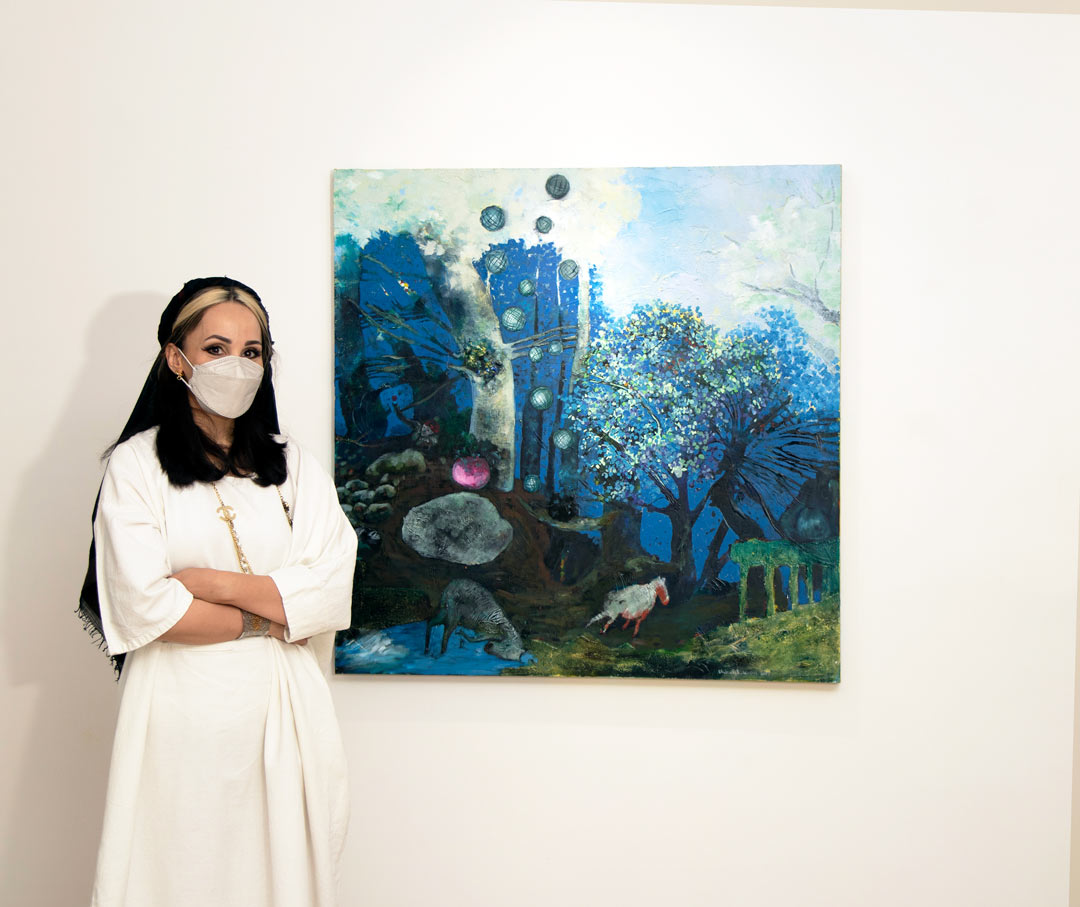